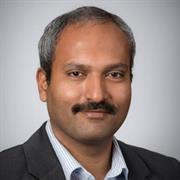 Dr. P. Ravi Selvaganapathy is a Professor of Mechanical and Biomedical Engineering at McMaster University, Canada. He is also the Canada Research Chair in Biomicrofluidics. He completed his B.S. in chemical and electrochemical engineering (1998) from Central Electrochemical Research Institute, India. He then obtained his M.S and Ph.D in electrical engineering (2002) from University of Michigan, Ann Arbor. He was a postdoctoral fellow at Sandia National Laboratories from 2003-2004 and joined McMaster University in 2005. His research interests are in the development of microfluidic devices for drug discovery, drug delivery, diagnostics and artificial organs. He has more than 20 years of extensive experience in the micro/nano fabrication and microfluidics in the areas of medical and environmental diagnostics, drug delivery and drug discovery which has resulted in ~75 publications, in the top journals in the field. In addition he has published more than 50 refereed conference papers and has presented 25 invited talks at conferences, universities and other forums. His research has won a number of best paper awards and has been selected as cover articles for journals. He has written 6 invited book chapters and been issued 6 US patents related to MEMS/microfluidic devices. Two of his technologies has been licensed for commercialization and he has consulted with a number of leading companies in the field. Some of his research has been featured in scientific media such as Popular Mechanics as wells as in mainstream media such as CBC News, and in newspapers across Canada. He also received the Early Researchers Award from the ministry of research and innovation in 2010 and has been named as a Rising Star in Global Health by Grand Challenges Canada in 2012