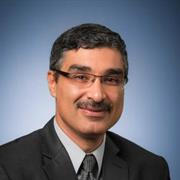 Mohamed H. Bakr received a B.Sc. degree in Electronics and Communications Engineering from Cairo University, Egypt in 1992 with distinction (honors). In June 1996, he received a Master's degree in Engineering Mathematics from Cairo University. In 1997, he was a student intern with Optimization Systems Associates (OSA), inc. From 1998 to 2000, he worked as a research assistant with the Simulation Optimization Systems (SOS) research laboratory, McMaster University, Hamilton, Ontario, Canada. He earned the Ph.D. degree in September 2000 from the Department of Electrical and Computer Engineering, McMaster University. In November 2000, he joined the Computational Electromagnetics Research Laboratory (CERL), University of Victoria, Victoria, Canada as an NSERC Post Doctoral Fellow. Dr. Bakr received a Premier’s Research Excellence Award (PREA) from the province of Ontario, Canada, in 2003. He also received an NSERC Discovery Accelerator Supplement (DAS) award in 2011. In 2014, he was a Co-recipient of Chrysler’s innovation award for project on novel designs of hybrid cars. In 2015, he was listed on the Dean’s Teaching Honour Roll.

He is currently working as professor with the Department of Electrical and Computer Engineering, McMaster University. He is the author/coauthor of over 230 journal and conference papers, two books on the optimization and CAD of high frequency structures, two book chapters on optimization and electromagnetic modeling, and two patents.