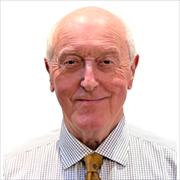 Following training in Internal Medicine and Haematology, Dr. Barr joined the team from the University of Glasgow charged with helping the University of Nairobi to establish a Faculty of Medicine. As there were no pediatricians trained in the local care of children with blood diseases and cancer at that time (1970), he joined two colleagues from McGill in providing this clinical service at the Kenyatta National Hospital. So began a 50 year odyssey in pediatric hematology and oncology, interrupted by an opportunity to be fully focused on basic research at the National Cancer Institute (NCI) in the US which allowed him to complete his doctoral thesis on Human Haematopoietic Homeostasis.
Within a year of returning to Scotland Dr. Barr received an invitation to visit the Department of Pediatrics at McMaster by its first Chair, Dr. Alvin Zipursky, during the infamous winter of 1977. This led to him emigrating with his family and joining the Faculty in September of that year. Dr. Barr was the Director of the Division of Hematology and Oncology from its establishment in 1981 until 2008. Consistent with his training in Internal Medicine his interest expanded to include adolescents and young adults (AYAs) with cancer, an area under development in the newly formed Children’s Oncology Group in 2000 under the leadership of Dr. Archie Bleyer. In 2005 Dr. Barr accepted the invitation from Dr. Bleyer to be the only Canadian in the initiative of the NCI to form a new discipline – AYA oncology – in North America. This provided the impetus to establish, in 2008, a national task force in Canada, headquartered at McMaster and funded by the then recently formed Canadian Partnership Against Cancer.
Meanwhile phase 3 of “career development” was underway – responding to the challenges of caring for children with cancer in low- and middle- income countries (LMICs) – a commitment which Dr. Barr began in 1993 as a member of the Current Treatment Committee of the International Union Against Cancer, a position he held until 2002, with an initial focus on the countries of Central America. The early recognition of malnutrition as an important limiting factor in efforts to improve the survival of these children has driven research in such populations in LMICs and the emergence, at Columbia University Medical Center in New York, of the International Initiative in Pediatrics and Nutrition, to which Dr. Barr was appointed Associate Director in February 2021.
Recognition of his accomplishments led to the award of the O. Harold Warwick Prize for Cancer Control Research from the Canadian Cancer society in 2009 and the Paediatric Academic Leadership Clinical Practitioner Award from the Paediatric Chairs of Canada in 2014. In November 2020 Dr. Barr was appointed to the Order of Canada.