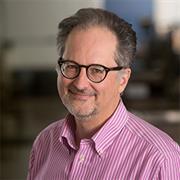 Dr. Giuseppe Melacini received his undergraduate degree in Chemistry (1992) and his PhD in Biophysical Chemistry (1996) from the University of Milan with external research at the University of California, San Diego (UCSD). During his graduate studies, he worked in the area of peptidomimetics under Dr Murray Goodman at UCSD. Then he moved to the Netherlands for his post-doctoral studies in the laboratories of Robert Kaptein and Rolf Boelens at Utrecht University. There he focused on the study of protein hydration through Nuclear Magnetic Resonance spectroscopy. After returning to UCSD as Lecturer and Assistant Project Scientist, he joined the Departments of Chemistry and Biochemistry at McMaster in 2003. In 2018-2019 Giuseppe served as Associate Chair of graduate studies in Chemistry, and since July 2019 as Director of the Chemical Biology graduate program.

Giuseppe has served on multiple grant review panels in Canada, and has reviewed US, European and Israeli grant applications. He has been an executive member of the Biophysical Society of Canada for which he chaired the award committee (2014-2019). He has also co-organized and co-chaired several conferences. He has consulted for biopharmaceutical and biotech companies. He is the author of over 110 peer-reviewed publications and is a member of the editorial boards of the Journal of Biological Chemistry and Nature Scientific Reports. He has served as associate editor for the Journal of Alzheimer’s Disease and as invited expert editor for the Proceedings National Academy Science USA (PNAS).

Giuseppe is very proud to have something in common with Jeff Bezos and Bill Gates – he does the dishes every night.