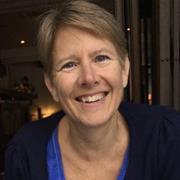 Bronsard is originally from Québec. She did her undergraduate studies at the Université de Montréal, graduating in 1983, and earned her PhD in 1988 from New York University under the supervision of Robert V. Kohn.After short-term positions at Brown University, the Institute for Advanced Study, and Carnegie Mellon University, she moved to McMaster in 1992. She was president of the Canadian Mathematical Society for 2014–2016.

Bronsard was a plenary speaker at the Annual SIAM meeting in Boston in 2016, at the Mathematical Congress of the America in Montreal in 2017 and at the CMS Summer meeting in Charlottetown in 2018. She is on the editorial board of Nonlinear Analysis, Mathematics in Science and Industry and the Canadian Applied Math Quaterly.

In her research, she has used geometric flows to model the interface dynamics of reaction–diffusion systems. Other topics in her research include pattern formation, grain boundaries, and vortices in superfluids. Bronsard was the 2010 winner of the Krieger–Nelson Prize. In 2018 the Canadian Mathematical Society listed her in their inaugural class of fellows.