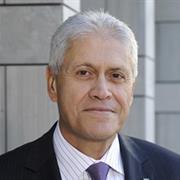 Current research interests are primarily related to i) the physics of twophase flow and its application to the power and process industries, and ii) modelling of buoyancy induced flows.

The research program in twophase flow is directed mainly towards the development of constitutive relationships and providing benchmark data for the verification of computer codes. Typical ongoing and planned research programs include, i) an experimental and analytical study of the characteristics of steamwater flow in network branches, involving determination of phase separation and pressure variations at piping junctions, ii) a study of subcooled flow boiling in vertical channels, involving experimental investigation into the axial void fraction profile as well as the local bubble behaviour and size. Gamma densitometry is used for void fraction measurements while a high speed video camera and digital image processing technology is used for studying bubble behaviour. Correlations for bubble size, interfacial area concentration and interfacial heat transfer coefficients are developed. The study also involves modelling of the onset of significant voids (OSV) phenomenom and modelling the axial void distribution in boiling and condensing flows. (iii) an experimental study in the use of electric fields to enhance the boiling heat transfer of refrigerant R-134a which is concerned with quantifying the electrohydrodynamic (EHD) enhancement of convective flow boiling in narrow channels. All the above studies are supported by and coordinated with the power industry.