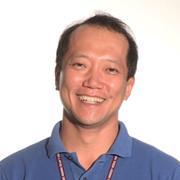 I am a Professor in the Department of Physics & Astronomy and Radiation Sciences Graduate Program at McMaster University, Canada. I received the BSc degree in Nuclear Engineering from Seoul National University, Korea in 1994. My MSc and PhD degrees were also awarded at the same university in 1996 and 2002.

Development of a realtime unfolding algorithm for beta-ray spectrometry and dosimetry,

Development of a machine learning based neutron-gamma pulse shape discrimination,