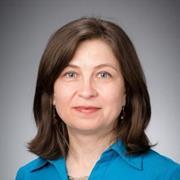 Sorina Dumitrescu received the B.Sc. and Ph.D. degrees in mathematics from the University of Bucharest, Romania, in 1990 and 1997, respectively. From 2000 to 2002 she was a Postdoctoral Fellow in the Department of Computer Science at the University of Western Ontario, London, Canada. Since 2002 she has been with the Department of Electrical and Computer Engineering at McMaster University, Hamilton, Canada, where she held Postdoctoral, Research Associate, and Assistant Professor positions, and where she is currently an Associate Professor. Her current research interests include multimedia coding and communications, network-aware data compression, signal quantization, steganalysis. Her earlier research interests were in formal languages and automata theory. Dr. Dumitrescu was a recipient of the NSERC University Faculty Award during 2007-2012.