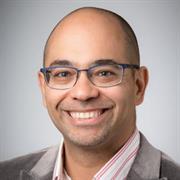 Dr. El-Dakhakhni has two distinct research groups. His first group is focused on simulating complex systems to identify their interdependence-induced vulnerabilities and the subsequent cascading/systemic risks and enhance their overall resilience. Within his INViSiONLab [Interdependent Network Visualization, Simulation, Optimization, aNalysis, and Learning laboratory], his trainees utilize advanced machine learning techniques, multi-agent simulations, complex network theoretic approaches, and other advanced data analytics and data visualization tools to mobilize knowledge to different public- and private sector stakeholders. He is the founding Director of the McMaster INTERFACE Institute, within which his vision has been providing the multidisciplinary platform for researchers to collaboratively address grand challenges at the interfaces between social-, natural- and medical-sciences and engineering. He is also the Director of the NSERC-CaNRisk-CREATE program, focusing on developing energy systems resilience quantification tools and cross-disciplinary systemic-risk management frameworks. His emergence as a leader in this area has been recognized through an NSERC Discovery Accelerator Supplement (DAS) award in 2016, placing him among only a few researchers in Canada recognized with such a prestigious honour twice in their career. He has been designated as a McMaster University Scholar and elected as a Member of the Royal Society of Canada, College of New Scholars, Artists and Scientists. Dr. El-Dakhakhni is also a member of the leadership team of the American Society of Civil Engineers (ASCE) Risk & Resilience Measurement Committee and the ASCE Disaster Response and Recovery Committee.

Dr. El-Dakhakhni’s second research area focuses on experimentally and analytically evaluating structures and infrastructure fragility, risk and resilience in a multi-hazard environment. He holds the Martini, Mascarin and George Endowed Chair in Masonry Design, and is the Co-Director of the McMaster Centre for Effective Design of Structures. In addition to his numerous related publications, Dr. El-Dakhakhni is also heavily involved in knowledge mobilization in this area, where he has served/been serving on several code and standards committees in Canada and the USA. An ASCE Fellow, and a Section Editor of the ASCE Journal of Structural Engineering, Dr. El-Dakhakhni has been recognized through several prestigious research awards including an Ontario Early Researcher Award, an NSERC-DAS, the Alan H. Yorkdale Research Award and the John B. Scalzi Research Award.