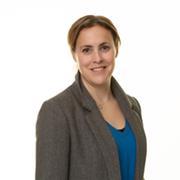 A 65-year-old tends to have about the same relationship to his or her body as when they were 64. While this consistency might not seem shocking, it is in conflict with what Meridith Griffin refers to as the “increased discourse on the responsibility to age actively.”

Exercise and fitness can play a powerful role for aging people, allowing them to maintain both greater physical independence and also richer social connections. But most people have spent their entire lives aware of the good things they should be doing – and not doing them. It’s unreasonable to expect this disparity to suddenly disappear late in life.

Griffin has a background in Kinesiology, but her interests extend beyond physical fitness to more general questions around how people decide to do something new later in life. She studies the rich relationships among disability, accessibility, and social engagement via leisure and recreation. She does innovative work with narratives documenting the stories people tell about themselves, and looking at the ways people can “destabilize” self-perceptions, even after a long lifetime of conditioning.

Using interviews, observation and ethnography, Griffin tries to get at the unseen inhibitors that hold people back from embracing something new – everything from fear of competition, to unease about defying society’s expectations.

Griffin is driven not just by a desire to understand the limitations of the stories people tell, but also to create and disseminate more stories, and to create more capacity for people to get involved.