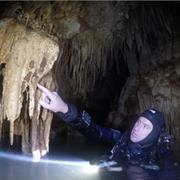 Dr. Eduard Reinhardt is a full professor and researcher in the School of Earth, Environment and
Society and came to McMaster as an assistant professor in 1998. He earned an undergraduate
honours degree from Carleton University in Directed Interdisciplinary Studies (Marine
Geoarchaeology) and then a PhD in Earth Sciences (Senate Medal) also from Carleton. He held
a post-doctoral fellowship (Killam and NSERC) at Dalhousie University prior to his appointment
at McMaster.

He is a well-respected scientist in marine geoarchaeology having developed new methods and
approaches for the study of underwater archaeological sites. He has worked on underwater
archaeological sites (ancient harbors) throughout the Mediterranean, Middle East and is now
working in Mesoamerica (Yucatan Peninsula) on underwater caves and cenotes examining
Maya and PaleoIndian sites. His research focusses on reconstructing coastal environmental
change and interrelationships between climate and sea-level, as well as its impact on human
populations.

His research is widely published and cited having contributed research articles to journals such
as Science, Science Advances, Geology and Quaternary Science Reviews, amongst others.