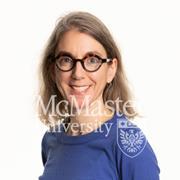 Dr. Pamela Swett received her undergraduate training at Bryn Mawr College and completed her graduate studies at Brown University. Her dissertation received the university’s Joukowsky Family Dissertation Award for distinguished thesis in the Social Sciences in 1999. She arrived at McMaster that year as an assistant professor. She was promoted to associate in 2004 and full professor in 2015. Swett was Chair of the Department of History from 2011-2017 and served as Associate Dean of Humanities Graduate Studies and Research (Humanities) before becoming Dean of the Faculty of Humanities on July 1, 2019. She has received research grants from the Deutscher Akademischer Austauschdienst, the Alexander von Humboldt Foundation, the Thyssen Foundation, German Historical Institute, and the Social Science and Humanities Research Council of Canada. Alongside journal articles and book chapters, she is the author of Selling under the Swastika: Advertising and Commercial Culture in Nazi Germany (Stanford, 2014) and Neighbors and Enemies: The Culture of Radicalism in Berlin, 1929-1933(Cambridge, 2004) and co-editor of Pleasure and Power in Nazi Germany (Palgrave, 2011) Selling Modernity: Advertising in Twentieth Century Germany (Duke, 2007). She is also the current co-editor of the modules on Nazi Germany for the German Historical Institute’s online collection German History in Documents and Images. Her current research project is entitled “Citizen Soldiers: Military Service in Divided Germany.” Her teaching interests lie in 20th century German and European social and cultural history.