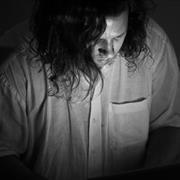 David Ogborn is an artist programmer and artist researcher, committed to unfolding the potential for algorithms and computation to be sites of play, curiosity, and collaboration. This work takes the form of solo and ensemble performances of live coding and network music, the development of software to be used by artists, students, teachers, and researchers, and writing that attempts to both expand and unsettle these activities. At McMaster, he can most often be found in the Networked Imagination Laboratory (NIL), a CFI-funded space that puts a massive array of loudspeakers, multiple video walls, and high-performance computing at the service of collaborative, networked live coding. He is a founding member of McMaster's Cybernetic Orchestra (a live coding laptop orchestra continuously active since 2010) and half of the duo very long cat (with tabla player Shawn Mativetsky). He is the lead developer of numerous software projects and libraries used in network music and live coding, including the Estuary platform for collaborative live coding in web browsers, and the Punctual language for generative music and visuals. His writing about live coding, laptop orchestras, and network music has appeared in Computer Music Journal, Organised Sound, the Journal of Music, Technology, and Education, and the proceedings of the International Conference on Live Coding. In addition to teaching in the undergraduate Multimedia program, the MA in Communication and New Media, and the PhD in Communication, New Media, and Cultural Studies, he is currently serving as the inaugural director of the Centre for Networked Media and Performance (CNMAP).