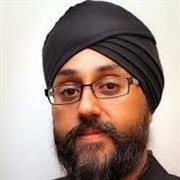 Professor Sukhvinder Obhi works in the Department of Psychology, Neuroscience & Behaviour at McMaster, where he also directs the Social Brain, Body & Action Lab, and the Neurosociety Lab. He completed his PhD at University College London (UK), was a visiting graduate fellow at Harvard Medical School and was a postdoctoral fellow at Western University. His research focuses on the neural and cognitive bases of social behaviour, with an emphasis on power, status, agency and volition. He also conducts research on various issues related to social diversity, many of which are pertinent to the professional domains of inclusive leadership and diversity and inclusion. Dr. Obhi is a sought-after speaker and thought leader for many international organizations, including in both the private and public sectors, including multiple ministries within the Government of Canada. His research on power’s effects on the brain has been covered by mainstream media outlets including the Atlantic, CNN, the New York Times, Harvard Business Review, NPR, and Canada’s Globe & Mail, among many others. He has published numerous articles and 3 books and serves in editorial roles for multiple journals.