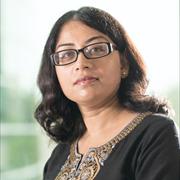 Dr. Chandrima Chakraborty is a Professor in the Department of English and Cultural Studies and Director of the Centre for Peace Studies. She was awarded the title of University Scholar at McMaster University in 2017 and was elected to the Royal Society of Canada's College of New Scholars, Artists and Scientists in 2019.

Dr. Chakraborty’s research is on public memory, nationalist history, masculinity and religion, with a focus on the literatures and cultures of South Asia and the South Asian diaspora.

Over the last decade, she has refocused the attention of the scholarly community and the general public on the 1985 Air India bombings (“the worst mass murder in Canadian history”) through conferences, publications and community outreach. She has been conducting interviews with families and friends of those who died on Air India Flight 182 and gathering materials from family members and other critical witnesses for the first-ever archival collection on Air India, engaging McMaster Library as the repository, thereby creating a public site for memorialization and ongoing research.

She is also conducting research on the relation between race, racism and the current global pandemic focusing on South Asian and East Asian Canadians. Her research project is titled," Covid-19 and Asian Canadians: Why does race matter?"