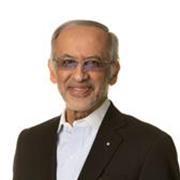 Liyakat Takim
Professor, Institute On Globalization and the Human Condition

Professor Liyakat Takim is the Sharjah Chair in Global Islam at McMaster University in Hamilton, Canada. A native of Zanzibar, Tanzania, he has spoken at more than eighty academic conferences and authored one hundred scholarly works on diverse topics like reformation in the Islamic world, the treatment of women in Islamic law, Islam in America, the indigenization of the Muslim community in America, dialogue in post-911 America, war and peace in the Islamic tradition, Islamic law, Islamic biographical literature, the charisma of the holy man and shrine culture, and Islamic mystical traditions. He teaches a wide range of courses on Islam and offers a course on comparative religions.

Professor Takim’s second book titled Shi'ism in America was published by New York University Press in summer 2009. His first book, The Heirs of the Prophet: Charisma and Religious Authority in Shi‘ite Islam was published by SUNY press in 2006. He is currently working on his third book, Ijtihad and Reformation in Islam. Professor Takim has taught at several American and Canadian universities and is actively engaged in dialogue with different faith communities.