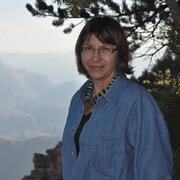 Magda Stroińska (MA Warsaw, PhD Edinburgh) is Professor of German and Linguistics at McMaster University in Hamilton, Ontario. Her major areas of research include sociolinguistics and cross-cultural pragmatics, in particular cultural stereotyping, language and politics, propaganda and language manipulation, the issues of identity in exile, aging and bilingualism, as well as language and psychological trauma. She is also interested in theory of translation and computational linguistics.

She co-edited a number of books - on stereotypes in language teaching with Martin Löschmann (1998); on linguistic representations of culture (Relative points of view, 2001); on Exile, language and identity (with Vikki Cecchetto, 2003), on International classroom: Challenging the notion (with Vikki Cecchetto, 2006), and on Unspeakable: Narratives of trauma (with Vikki Cecchetto and Kate Szymanski, 2014). She currently studies the phenomenon of hate speech in totalitarian regimes and its effects in post-communist Eastern Europe and beyond.