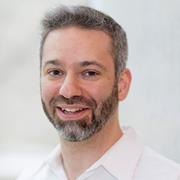 Known for his innovative blend of performance, teaching and research, Dr. Michael Schutz is currently Associate Professor of Music Cognition/Percussion at McMaster University, where he is currently University Scholar in recognition of his work connecting music performance and music perception. He is the founding director of the MAPLE Lab and a core member of the McMaster Institute for Music and the Mind. Dr. Schutz’s research is supported by grants from Canadian agencies such as the Canadian Foundation for Innovation (CFI), Natural Sciences and Engineering Research Council (NSERC), Social Sciences and Humanities Research Council ofCanada (SSHRC), and Ontario’s Early Researcher Award (ERA), as well as international agencies such as the National Institutes of Health (NIH) and the American Academy of Audiology. He has been featured on both television and radio broadcasts including On The Nature of Things, Quirks & Quarks, and Ontario Today with Rita Celli. His findings receive attention in print media, and now appears in multiple textbooks including Psychology of Music (Tan, Pfordresher, & Harre, 2010, Psychology Press), Cognitive Psychology (Robinson-Riegler & Robinson-Riegler, Pearson-3rd edition), and The Psychology of Music in Multimedia (Tan et al., 2013, Oxford University Press). Michael is active in the Percussive Arts Society (PAS) and the Society for Music Perception and Cognition (SMPC), and served as Chair of the Programming Committee for SMPC 2013 (Toronto). He was elected to a three year term on SMPC Board in 2014.