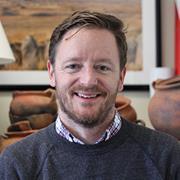 I conduct archaeological research on Formative Period cultures of the south central highlands of Bolivia. My ongoing work employs ceramic analysis to investigate community organization during the periods prior to the appearance of Tiwanaku, one of the earliest urban centers in highland South America. I have focused my work on the Taraco Peninsula, on the southern shores of Late Titicaca, where I have led excavations, conducted geological surveys, and conducted fine-grained ceramic analysis. My research asks several broad anthropological questions: How did potters learn their craft in the past? How do crafting traditions develop, and how are they maintained? How do the production, distribution and consumption of crafts contribute to the development of community and political identity?

I am currently involved in four projects, all of which continue to explore my interest in crafting traditions, learning, and archaeologies of landscape. The first project, which is funded by a Social Science and Humanities Research Council (SSHRC) Insight Grant, involves the analysis of Late Formative (200 BC - 400 AD) and Tiwanaku (AD 400-1000) period ceramic collections, in order to explore changes in "communities of practice" across space and time. In this project both McMaster and Bolivian students are helping to explore the changes in skilled potting across time and space through the collection of raw materials (clays and sediments), the analysis of ceramic attributes, and detailed study of pottery and clay using a range of analytical techniques (petrography, LA-ICP-MS (Laser Ablation Inductively Coupled Plasma Mass Spectrometry), and radiography. There are several possibilities for graduate work both in the field and in my Laboratory for Interdisciplinary Research of Archaeological Ceramics.

My second project, which has received funding from McMaster’s Arts Research Board (ARB) and the Wenner-Gren Foundation, consists of working closely with modern potting communities in the Lake Titicaca Basin. With this project, which might be conceived as an "archaeology of the present" (Gonzales-Ruibal 2009), I am exploring the social contexts of learning, embodied techniques, and crafting traditions. Our team, which consists of my co-director Victor Plaza and ethnographer Oswaldo Plaza, is using a range of methods, including interviews, video recording, archival research, and fine-grained ceramic analysis to explore the practices of highly skilled potters and the historical foundations of specialized potting communities in the region.

The third project, which is in its infancy, is a larger collaborative project with Dr. John Janusek (Department of Anthropology, Vanderbilt University), Carlos Lemuz (Sociedad Arqueológico de La Paz), and Victor Plaza (Director of Tourism and Culture for the municipality of Escoma). In 2012 and 2013 we explored a relatively unknown archaeological region of the eastern Lake Titicaca Basin, and encountered many impressive and well-preserved archaeological sites. In 2014 we initiated the Proyecto Arqueológico de Redes de Interacción Altiplano y Valles Interandinos (PARIAVA), in order to study Late Formative social landscapes and settlements on the eastern side of the Lake Titicaca basin. This project is exciting because it will produce data that may radically change our understanding of larger regional relationships of the South Central Andes. Our long-term plan is to create an umbrella project for regional survey, small-scale excavations, and detailed artifact analysis, all of which offer substantial opportunities for graduate students.

My fourth project is a book co-edited with Dr. Ann Stahl (Department of Anthropology, University of Victoria) exploring the theoretical literature on situated learning. This project grows out of a series of conferences, including a Society for American Archaeology Amerind Foundation Seminar titled "Learning and Doing: Communities of Practice in Scalar Perspective”. This workshop, which is also funded by the Wenner-Gren Foundation, assembled a wide number of scholars, including ethnographers, historians and archaeologists, to explore the utility of engaging with the situated learning/communities of practice scholarship across spatial and temporal scales and during times of rapid historical change. We are currently preparing a manuscript with the University of Arizona Press.