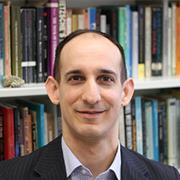 Inder S. Marwah's research is in the field of political theory. Broadly speaking, his work examines the ways that different traditions of political thought respond to the fact of human diversity and pluralism, both historically and in contemporary contexts. From an historical standpoint, his research focuses on the intersection of race, culture and imperialism/colonialism in late modern political thought (late 18th-early 20th century), and more particularly, on the ways that both European and non-European thinkers have conceptualized the relationship between Western and non-Western worlds. From a contemporary perspective, he also has interests in democratic theory and multiculturalism, as well as in public policy on immigration, multiculturalism and religious rights.

Inder's current research revolves around two projects. The first is a book, tentatively entitled Millian Liberalism, that considers the resources that different strands of liberal political thought offer for responding to the profound social, cultural and religious diversity that we have come to inhabit. Against the overwhelming influence of Kant and neo-Kantianism in contemporary liberal political theory, the book argues for the defensibility – and normative advantages – of John Stuart Mill’s liberalism. The argument is both historical and contemporary. Historically, it undertakes a careful reconstruction and critical analysis of gender, race, class and imperialism in both thinkers’ moral and political philosophies. This informs the contemporary argument: that a Millian liberalism provides a better set of conceptual resources for understanding human diversity and difference and for responding to the deep pluralism of late modernity than does Kant’s.

The second project, initiated with the support of a SSHRC postdoctoral fellowship (and recently supported by an ARB research grant), explores the influence of Darwin and Darwinian evolutionary theory over late 19th and early 20th century political thought - and particularly, non-western political thought - that resisted colonialism, imperialism and political domination. While the impacts of social Darwinism are well established, the project aims to uncover a lesser-known strand of anti-imperial thinking that drew on evolutionist thinking to undermine the deterministic accounts of social progress sustaining colonialism. This focuses on a range of non-Western thinkers and activists (particularly in India and Egypt) who marshaled Darwinian and evolutionist arguments to resist British imperialism.