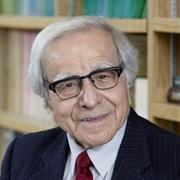 Simon Haykin received his B.Sc. (First-class Honours), Ph.D., and D.Sc., all in Electrical Engineering from the University of Birmingham, England. He is a Fellow of the Royal Society of Canada, and a Fellow of the Institute of Electrical and Electronics Engineers. He is the recipient of the Henry Booker Gold Medal from URSI, 2002, the Honorary Degree of Doctor of Technical Sciences from ETH Zentrum, Zurich, Switzerland, 1999, and many other medals and prizes.

He is a pioneer in adaptive signal-processing with emphasis on applications in radar and communications, an area of research which has occupied much of his professional life.

In the mid-1980s, he shifted the thrust of his research effort in the direction of Neural Computation, which was re-emerging at that time. All along, he had the vision of revisiting the ﬁelds of radar and communications from a brand new perspective. That vision became a reality in the early years of this century with the publication of two seminal journal papers: