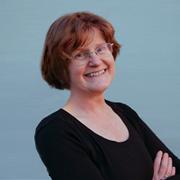 Anita Gross is a physiotherapist, a researcher and an educator. She is a Fellowship in the Canadian Academy of Manipulative Physiotherapy (FCAMPT) and has been awarded CAMPT Lifetime Membership (2019). She is an Associate Clinical Professor at McMaster University and coordinates the Orthopaedic Musckuloskeletal-Manipulative Physiotherapy (OMPT) field of study in Rehabilitation Sciences at McMaster University. She is also a lecturer at Western and the Canadian Physiotherapy Association –Orthopaedic Division. Her clinical work focuses on the TMJ, neck care and spinal care. She has been a member of national and international executive committees: CAMPT executive (2004-2016), International Federation of Orthopaedic Manipulative Physical Therapists member organization representative (IFOMPT, 2004-2016) and is the chair of the IFOMPT Task Force on Manipulation in Infants, Children and Adolescents (2020-present).

Her research focus is in Knowledge Translation for neck care. 1) She coordinates a research network: Cervical Overview Group (COG), conducts and maintains 11 Cochrane and 4 other systematic reviews on neck pain. 2) She was a member of the American Physical Therapy Association's Clinical Practice Guideline (CPG) Update in 2017. 3) She is an author of an evidence-based i-book, 4) She established a open access knowledge to action "Decision Aid" for neck pain on Physiopaedia (social media wiki website). She links to other research groups such as the Head and Neck, Arm, Hand Research (HaNSA) Group and 'Which Exercise" for low back pain. She has 120 peer reviewed publications, has been Principal/co-investigator on 30 grants and has been an invited speaker at 20 international conferences. She was an invited member to closed international conference Australia Whiplash 2011, the APTA Neck Care Guidelines committee, the College of Physiotherapist of Ontario, authorized acts advisory sub-groups on manipulative physiotherapy in 2010 and competency profile development group member for College of Physiotherapists of Alberta in 2007.