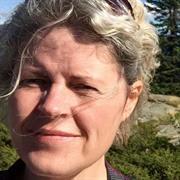 Catherine Frost received her Ph.D. in Political Science from the University of Toronto, and joined McMaster in 2002. Her teaching and research interests are in political thought and history, including political community, nationalism and collective identity, as well as communications theory, literature and new media. Her research centers on questions of representation and justice, and asks how and why systems of representation are created and re-created, and how this shapes and reshapes politics.

Her current research looks at political origins and renewal, with a special focus on political founding, including Declarations of Independence and the origins of law. It addresses how changes in communications practices, concepts of time, and experiences of violence and loss, impact on the pursuit of freedom and sovereignty through founding.

Frost is currently working on a book entitled Language, Democracy and the Paradox of Constituent Power: Declarations of Independence in Comparative Perspective that will be published with Routledge Press. The book asks how constituent power – how ‘the people’ – finds its voice. The quintessential form of founding speech in the modern era is the declaration of independence, even though it is a poorly understood instrument that fails to meet minimal standards for coherence set by law, democratic legitimacy, or linguistics. Beginning with founding speech in the American Declaration, this project uses insights drawn from unexpected or unlikely forms of founding in cases like Ireland and Canada to reconsider the role of time and loss in how such speech is framed. It brings the discussion up to date by looking at recent debates in Scotland, where an undeclared declaration of independence overshadows contemporary politics. Drawing on the work of Hannah Arendt and using a contextualist, comparative theory method this project suggests that the capacity for renewal through speech arises in aspects of language that operate beyond conventional performativity.

Related research work also addresses: the role of political death and self-sacrifice, prophecy in Hobbesian theory, the politics of photography, passports and citizenship, the political theory of Hannah Arendt, ancient literature, political revolution in the digital age, performative politics and the political force of poetic speech, and the relationship between national identity and inclusion.

Her book, Morality and Nationalism, was part of the Routledge “Innovations in Political Theory” series and looked at the history of nationalism in Ireland and Quebec.

Dr. Frost is a member of the radical political theory group and the multiculturalism research cluster in the Political Science department at McMaster. Before joining McMaster Frost held research fellowships at the Hebrew University in Jerusalem and McGill University in Montreal, and before entering academia, she served as a policy advisor in the Ontario government and a communications advisor in the private sector.