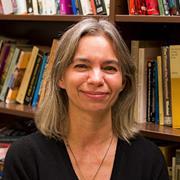 Juanita De Barros is Professor in the Department of History at McMaster University and the former president of the Canadian Association of Latin American and Caribbean Studies. She did her PhD at York University and was a DuBois-Mandela-Rodney fellow at the Department of Afro-American and African studies at the University of Michigan. Her research concentrates on the 19th and 20th century Caribbean with a focus on the social history of health, childhood, gender, and urban history. Her most recent publications are Reproducing the British Caribbean: Sex, Gender, and Population Politics after Slavery (University of North Carolina Press, 2014) and the edited essay collection, Public Health and the Imperial Project (2015). Her other publications include Order and Place in a Colonial City: Patterns of Struggle and Resistance in Georgetown, British Guiana, 1889-1924 (2002) and two co-edited essay collections: Health and Medicine in the Caribbean: Historical Perspectives, 1800-1968 (2009) and Beyond Fragmentation: Perspectives on Caribbean History (2006); and numerous journal articles and book chapters. Her current research projects include a SSHRC-supported project titled “Colonial Institutions and Children’s Welfare in the British Caribbean” and an ongoing project exploring the history of reproductive health in the English-speaking Caribbean.