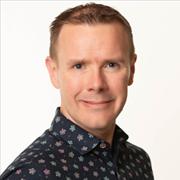 Prior to entering medicine, Dr. Callen completed his PhD in Neuroscience at the University of Toronto under the supervision of Dr. Sandra Black. His thesis was entitled "Quantitative Analysis of Changes in Limbic Structures in Probable Alzheimer Disease Using Corregistered SPECT and Magnetic Resonance Imaging". Dr. Callen received his medical school training at McMaster and subsequently completed his residency training at The Hospital for Sick Children in Toronto. He joined the Pediatric Neurology team at McMaster in 2007.

Dr. Callen's primary area of interest is teaching and curriculum development. In conjunction with his colleagues, he founded the Pediatric Neurology Residency Training Program at McMaster in 2008. He has been Program Director since the program's inception. He has always had active involvement with other residency programs, primarily Adult Neurology and Core Pediatrics. He co-founded the National In-Training Examination for Canadian Pediatric Neurology Residents (NITECaP) in 2014 and continues to be the co-chair for this.

From an undergraduate medical education perspective, Dr. Callen was the Neurosciences subunit planner for the McMaster Medical School from 2011 to 2020. During that time, he refined the curriculum and introduced active learning sessions in the form of Team Based Learning.