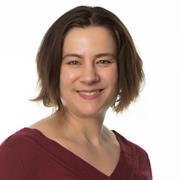 Christina Baade is professor in the Department of Communication Studies and Multimedia at McMaster University, where she also holds the title of University Scholar (2015–19). She is affiliated with the program in Gender Studies and Feminist Research, the Cultural Studies and Critical Theory MA Program, and the Centre for Networked Media and Performance.

Dr. Baade researches popular music, media, and performance. Her research examines how broadcasting (especially radio) has intersected with musical performances and cultural meaning, with particular attention to the role played by gender, race, class, nationality, and sexuality. This work spans from jazz and popular music broadcasting at the British Broadcasting Corporation in the 1930s and 1940s to midcentury television in Britain to the contemporary use of music streaming services in domestic spaces. Dr. Baade’s current research focuses on the work of women musicians in popular music, specifically Beyoncé and the iconic British singer Dame Vera Lynn.

Dr. Baade’s publications include Victory Through Harmony: The BBC and Popular Music in World War II (Oxford UP, 2012), which received an AMS 75 PAYS Publication Subvention and won the biennial Diana McVeagh Prize from the North American British Music Studies Association, the 2012 book prize from IASPM-Canada Chapter, and a Choice Outstanding Academic Title award; Music and the Broadcast Experience: Performance, Production, and Audiences (Oxford UP, 2016), which she coedited with Dr. James Deaville; and a special issue on “Music and Labour” for MUSICultures, co-edited with Susan Fast and Line Grenier. She has also published a number of peer-reviewed book chapters, as well as articles in journals including Popular Music, Journal of the Society for American Music, American Music, Journal of Popular Music Studies, The Radio Journal, Feminist Media Studies, and Atlantis, A Women’s Studies Journal / Revue d’Etudes sur les femmes.

Forthcoming publications include Music and World War II (Indiana UP), co-edited with Drs. Pamela Potter and Roberta Marvin; a special issue on Beyoncé for Journal of Popular Music and Society, co-edited with Drs. Marquita Smith and Kristin McGee; and Making Lemonade: Finding Art, Activism, and Community with Beyoncé in Troubled Times (Wesleyan UP), also co-edited with Drs. Smith and McGee. Dr. Baade is also at work on a monograph, tentatively called Bigger than the Beatles? Vera Lynn’s Postwar Career and the Problems of Popular Music History, which is funded by an Insight Grant from Canada’s Social Sciences and Humanities Research Council.

She is currently Vice President for the Society for American Music, serves on the executive for the North American British Music Studies Association, is a member of the American Musicological Society Performance Committee, and sits on the editorial board for MUSICultures. In the past, Dr. Baade has served on the AMS Council, the executives both the Canadian and U.S. chapters of the International Association for the Study of Popular Music, and as book review editor for Journal of the Society for American Music.

Christina Baade joined the McMaster University Faculty of Humanities in 2003. She holds a B.Mus. in clarinet and women’s studies from Northwestern University and an M.Mus. and Ph.D. in musicology from the University of Wisconsin-Madison. In her past as a performer, she was a founding member of Yid Vicious klezmer ensemble, whose sophomore compact disc was issued by the Knitting Factory label, and appeared with ensembles including the Madison Symphony Orchestra, the Wisconsin Chamber Orchestra, and the Milwaukee Chamber Orchestra.