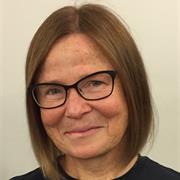 Dr. Jean Wilson is Director of the Arts & Science Program, in which she teaches ARTSSCI 3A06 / Literature, co-teaches (with H. Jafine) ARTSSCI 4MN2 / Movement and Integration and ARTSSCI 4MN1 / Local Explorations, and coordinates ARTSSCI 3X03 / Individual Study, ARTSSCI 4A06 / Individual Study, and ARTSSCI 4C06 / Thesis. Her first degree was an Honours BA in French and German from McMaster University. She went on to receive her MA and PhD in Comparative Literature as well as her BEd from the University of Toronto, and spent a year as a DAAD Fellow at the University of Tübingen in Germany. A member of the Department of Linguistics & Languages in the Faculty of Humanities at McMaster, Dr. Wilson has served also as Director of Comparative Literature and as Associate Director of Peace Studies.

Her teaching and research interests are primarily in Comparative Literature, German literature, and interdisciplinary studies. She has published essays on liberal arts education and on a range of authors, including Goethe, Dostoevsky, Heinrich von Kleist, Christa Wolf, Barbara Gowdy, and Toni Morrison. She is co-editor of “The Secular Scripture” and Other Writings on Critical Theory, 1976-1991, vol. 18 of The Collected Works of Northrop Frye (2006) and of Romanticism, Humanism, Judaism: The Legacy of Hans Eichner (2013). Dr. Wilson has received the McMaster Students Union Teaching Award for Arts & Science, the McMaster Students Union Teaching Award for Humanities, the President’s Award for Excellence in Instruction, and the Ontario Confederation of University Faculty Associations Teaching Award.