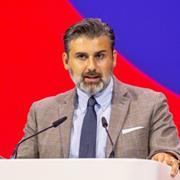 Dr. Shoamanesh is the founding Director of the Hemorrhagic Stroke Research Program within the Stroke and Cognition Program at the Population Health Research Institute at Hamilton Health Sciences. He is a Stroke Neurologist who obtained his M.D. from McMaster University (2007), prior to pursuing Neurology residency training at the University of British Columbia (2012). This was followed by fellowship training at the Boston University School of Medicine/Framingham Heart Study (2012-13) and Harvard Medical School (2013-14). He is an Associate Professor of Medicine (Neurology) at McMaster University, where he holds the Marta and Owen Boris Chair in Stroke Research and Care and previously served as Director of the Stroke Fellowship Program.

His main research focus is the characterization of hemorrhage-prone cerebral small vessel disease and the optimization of clinical care in this patient population. Towards this aim, he leads as principal investigator of the global phase III ENRICH-AF trial (NCT03950076) investigating optimal stroke prevention in intracranial hemorrhage survivors with atrial fibrillation at over 300 sites in 22 countries and is the founding chair of the Canadian HEmorrhagic Stroke trIals InitiatiVE (CoHESIVE; www.phri.ca/cohesive/). He additionally serves on the Steering and/or Executive Committees of several public and industry funded international randomized trials targeting secondary stroke prevention and the reversal of anticoagulant-related hemorrhage.