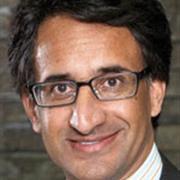 Dr. Parminder Raina is a professor in the Department of Clinical Epidemiology and Biostatistics at McMaster. He specializes in the epidemiology of aging with emphasis on developing the interdisciplinary field of geroscience to understand the processes of aging from cell to society. He holds the inaugural Raymond and Margaret Labarge Chair in Optimal Aging and a CIHR Investigator award, and received a Canada Research Chair in Geroscience in November 2010. He received the Ontario Premier's Research Excellence award on research in aging in 2004 to train and mentor new researchers. He is the director of the internationally recognized McMaster Evidence-based Practice Center which is funded by the U.S. based Agency for Healthcare Research Quality (AHRQ). He holds several national and international grants and has published many peer-review reports and articles for national and international agencies, and in leading scientific journals. He is the lead principal investigator of the Canadian Longitudinal Study.