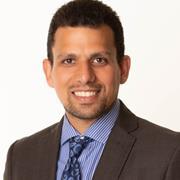 Dr. Eltorki earned his MD from the University of Alexandria, Egypt in 2007 and completed his rotating postgraduate internship with the Alexandria University Hospital Network. Upon relocating to Canada in 2009, he spent a year focusing on gastroenteritis research at the Hospital for Sick Children Emergency Department. In 2010, he began his pediatric residency training at the Hospital for Sick Children in Toronto. In 2013, he headed west to Calgary for his subspecialty training in pediatric emergency medicine at Alberta’s Children’s Hospital and the University of Calgary.

Dr. Eltorki has contributed to several research initiatives, including studies investigating practice pattern variation; emergency medicine research ethics; constipation; laundry detergent exposures in Canada; and a large-scale quality improvement study following an E. Coli outbreak in Alberta. Dr. Eltorki was awarded the New Investigator Fund in 2019 for implementing and testing a novel nursing directive for children with suspected appendicitis. He is a site investigator for a randomized placebo controlled trial that examines the effectiveness of nasal suctioning on infants with bronchiolitis. He is an active researcher in his division and supervises several trainee research projects.

His experience in Calgary allowed him to train in a high volume level I trauma tertiary care centre, where he honed his clinical skills and learned from a host of excellent clinical educators. In addition to working in his speciality, he also covers trauma call as Trauma Team Leader for McMaster Children’s Hospital. Dr. Eltorki developed a trauma pediatric airway algorithm for McMaster and its regional partners. He enhanced his teaching and simulation skills throughout his training and was recognized with a Christopher Ondaatje Award for excellence in teaching from the Hospital for Sick Children. Other than the contributions to resident education through simulation, Dr. Eltorki is part of the Pediatric Emergency Medicine Simulation Oversight Committee and helped establish continuing practice simulation for his colleagues. In addition, he is a member of the trauma simulation program, which holds multi-disciplinary, multi-speciality monthly trauma in-situ simulations. He is a frequent contributor to resident and staff teaching rounds on topics like trauma, sepsis and evidence based medicine.