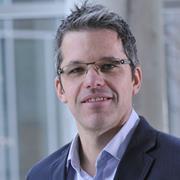 Brian Coombes received his BSc in Biochemistry (1997) and his Ph.D. in Medical Sciences (2002) from McMaster University. From 2002-2006 he was a CIHR and Michael Smith Foundation postdoctoral fellow at the University of British Columbia’s Michael Smith Laboratories in Vancouver. In 2006 he joined the Department of Biochemistry & Biomedical Sciences and established an active research program in host-pathogen interactions. The lab's focus is on enteric bacteria associated with acute and chronic human diseases including Crohn’s disease. He is the past recipient of the CIHR New Investigator Award (2007-2011), the Scientific Merit Award from the Public Health Agency of Canada (2007) and the Fisher Scientific Prize (2012). In 2010 Brian was inducted into Canada’s Top 40 Under 40, and in 2016 received the title of University Scholar. He is currently the Chair of the Department of Biochemistry and Biomedical Sciences.