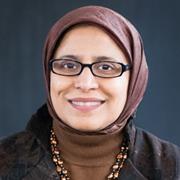 She has over 200 scientific publications on osteoporosis and parathyroid disease as well as numerous book chapters. She is the Editor or Co-Editor of a number of textbooks including the Handbook of Parathyroid Diseases and the Textbook Bone Metabolism, Parathyroid Gland and Calciotropic Hormones.

She is the founding chair of the annual Canadian Endocrine Update Scientific symposia as well as the Day in Endocrinology for primary care. Dr. Khan led the development of the Canadian position paper on the diagnosis and management of hypophosphatasia. She is leading the development of a national registry and a Canadian position paper in the management of X-linked hypophosphatemia.

In 2019 Dr. Khan was appointed as the Canadian Ambassador for the American Society of Bone and Mineral Research. She is also serving on the Professional Practice Committee of the ASBMR.